Over the years, we’ve gotten ourselves into many challenging hiking situations, from the Hengill Death Hike in Iceland, to the Leech Attack in Sri Lanka. And thanks to Telendos Island, we have a new one to add to our list of stupidly dangerous hikes. After so many years of travel, you’d think we might be smarter… 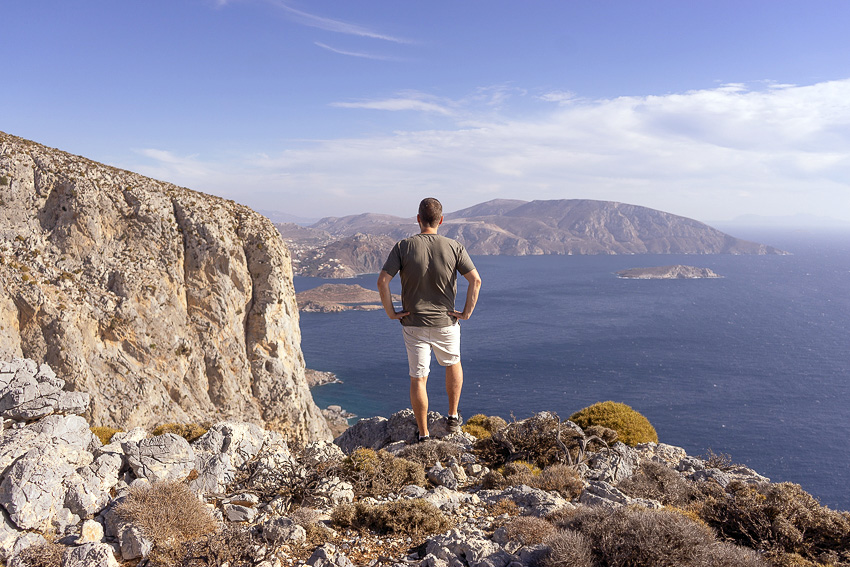 We had crossed over on the ferry to Telendos, with some friends who were spending the day climbing. After watching them for a couple hours, our necks were getting stiff, and we decided it was time to do something different. I loaded up a map of Telendos on my phone, and we discovered a hiking path which would eventually lead us back to town. This wasn’t the well-worn trail that goes along the northeastern coast, but one that would take us inland and onto the other side of the island. We figured that it would take us about 90 minutes. Hah.

The trail started out fine. There were plenty of way-markers and cairns, and we soon ended up at a little church. By this point, we were far above the climbers, whom we could see dangling from the rock. The sun was out, there was a nice breeze, and we were in great moods. After exploring around the church for a bit, taking our time, we continued more inland. 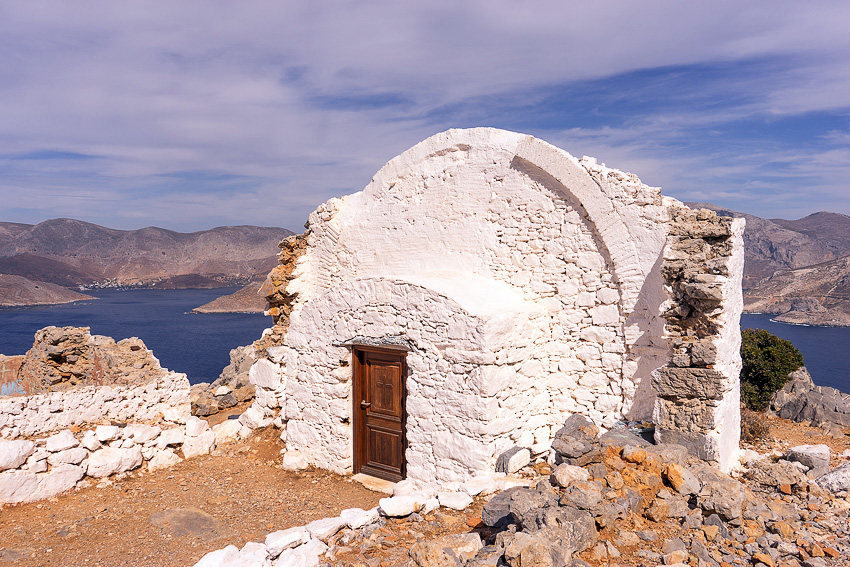 But after the church, things changed a bit. We had to pass through unbroken swaths of dried brush, and the hiking path eventually vanished. Soon, we had to consult our phone’s GPS to make sure we were on the right trail. We started to get a little worried, but every once in awhile, we’d spot another pile of rocks, or a splash of blue paint and we’d relax. Besides, the views were getting better and better, and we’re not averse to a little challenge!.Let’s press on!

We clambered up a boulder and arrived at our highest elevation of the day. Sure, it was going to be a bit later than we had anticipated, but the rest of the hike would be downhill, so surely the worst was behind us. We sat down to enjoy the view, and were promptly attacked by a swarm of hornets — we didn’t get stung, and were laughing as we made our escape. But now I understand how foolish we were, how blind to the obvious warning. A swarm of hornets is never a harbinger of good fortune.

Minutes after starting our descent, we realized that we were in trouble. The trail markers had re-appeared, which was good, but they were pointing straight down a cliff. Which was bad. But at this point, we had come too far to turn around. There was a stretch of at least four meters where we were literally rock climbing, just as genuinely as our friends on the other side of the island. Only without the benefit of ropes, or harnesses, or “safety”. 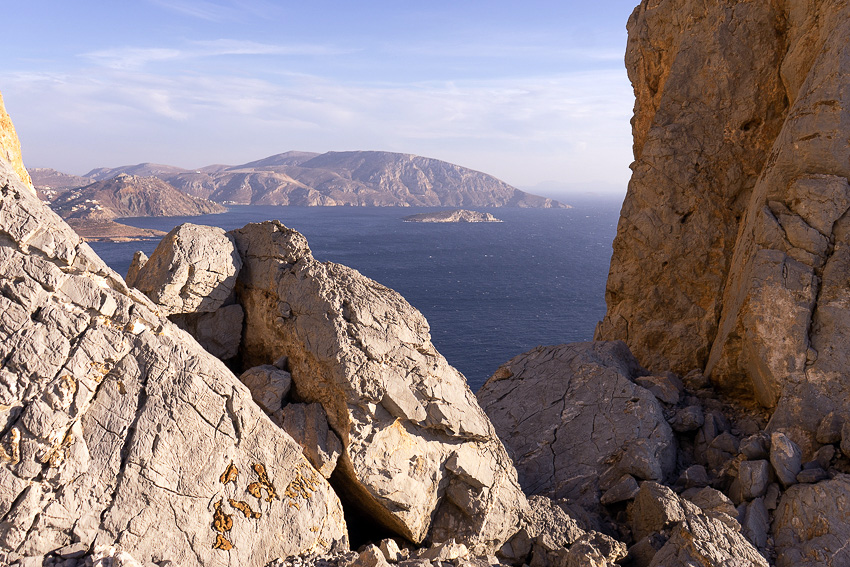 Once that was completed, matters did not improve. The next challenge was another sheer rock face, with a rope that seemed to suggest we were supposed to walk horizontally for about ten meters. Like, pushing with our feet against the wall, and holding the rope as we step sideways across to safety. That might sound like a fun adventure, and perhaps it would have been if (a) we weren’t already exhausted, (b) we were rock climbers in decent physical condition, (c) there wasn’t a straight drop which would spell certain death if we fumbled or dropped the rope.

Mike managed the challenge without too much problem, but I was panicked. The prospect of death was just too real, and I found myself paralyzed. I’m a bigger guy, and one wrong step or slip would mean the end. But the truth was, I didn’t have another option. Turning around was now impossible, and the remaining amount of sunlight was becoming a concern. With Mike encouraging me and telling me where to step, I took baby steps across the wall until reaching flat ground. 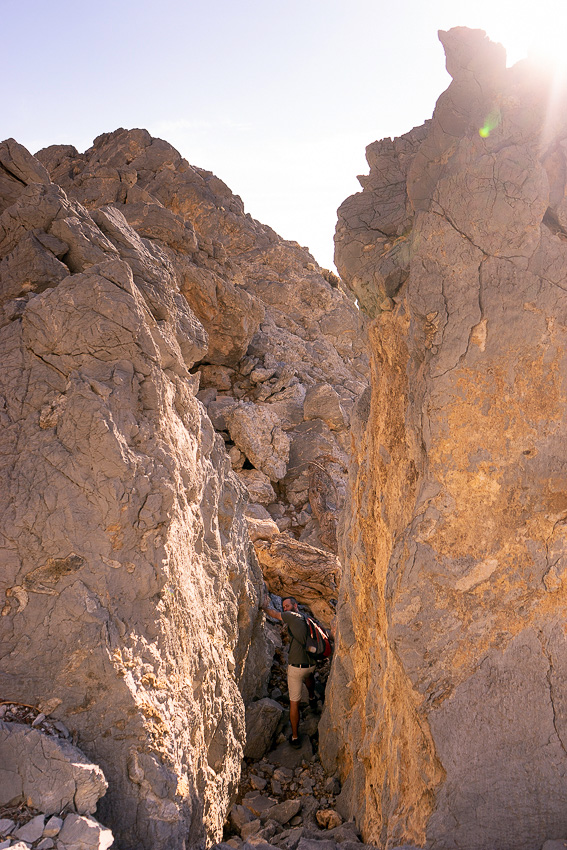 At this point, I was sweaty and shaking, and wanted nothing more than to just quit, or at least take a long rest. But the reality of our situation had sunk in. We had to pick up the pace if we wanted to be back in town before sunset, so I forced myself to be tough. We continued along the path, and after five minutes, encountered another, similar stretch requiring a rope. I was close to tears… getting across this one was just as difficult, and I’m still not sure how I mustered the strength.

The landscape by this point had become incredibly dramatic, with soaring rocks, sneaky crevices and beautiful views, but I was in no condition to appreciate it. The sun had set, and we still weren’t too close to town. We had no water left, and although we had put the rocks behind us, the path was extremely narrow, and at the top of an unforgiving cliff. Once again, it would be all too easy to make a false step, which would send us tumbling down to death. 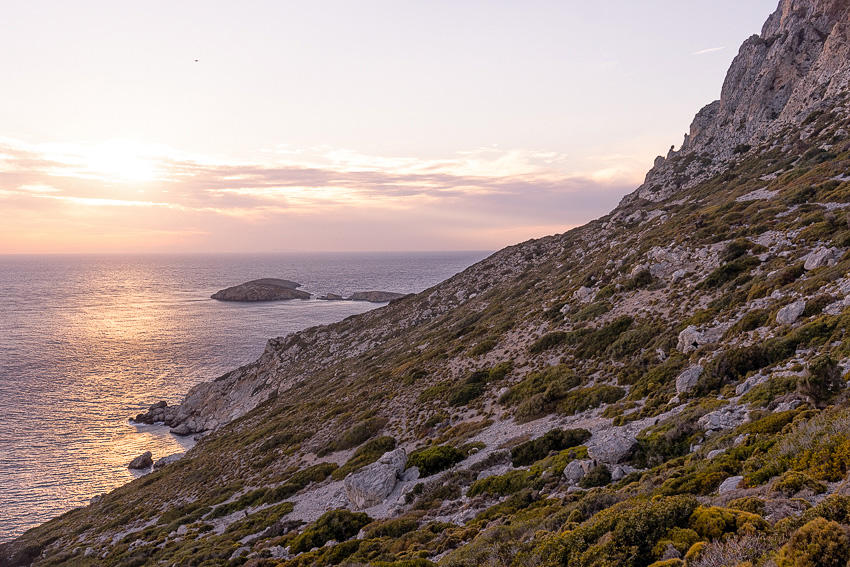 But we made it. Accompanied by a bleating sheep who’d starting following us on the final stretch of the journey, we walked through the darkened, narrow alleys and ended up at the ferry port. We arrived at the same time as our friends, who were shocked to see our battered, bloody, shell-shocked condition. We had planned this hike to be 90 minutes, but it was closer to seven hours. The day had been almost equally amazing and stupid, beautiful and terrifying, and I’m not sure it was worth it. You be the judge… check out the pictures! 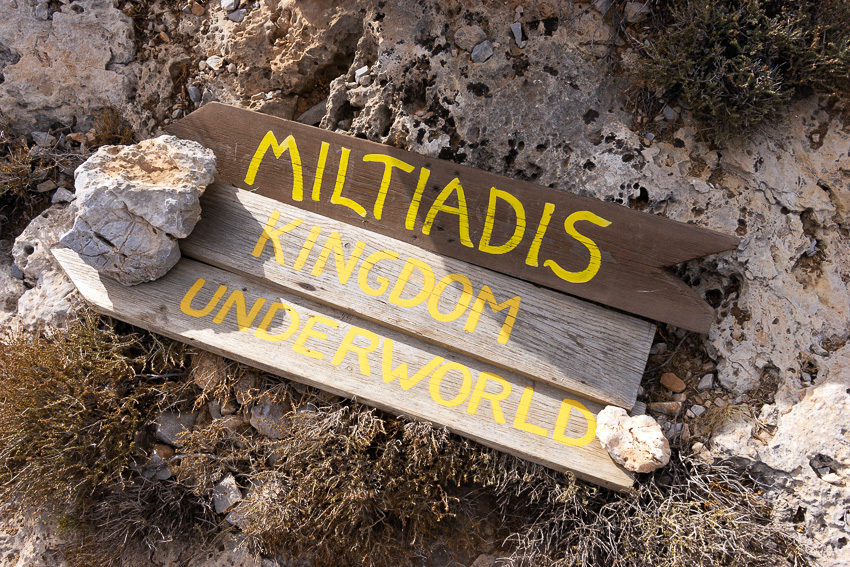 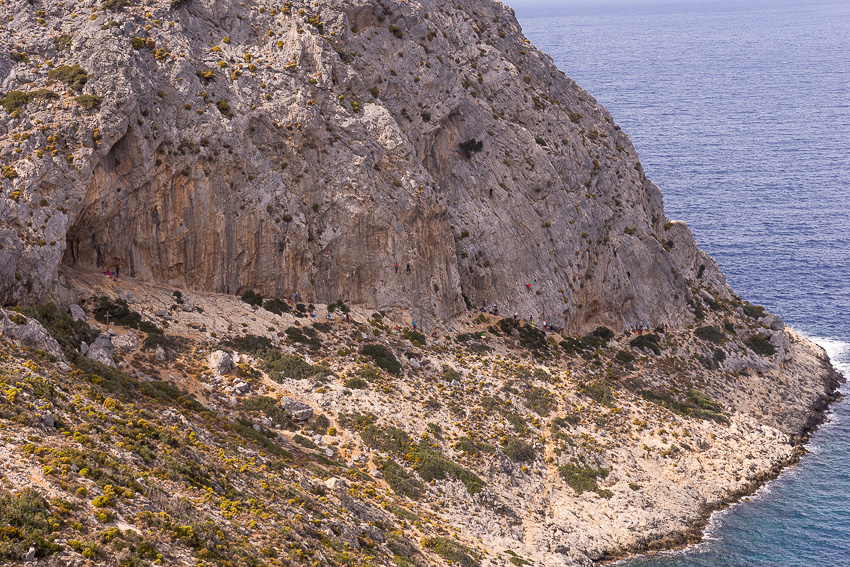 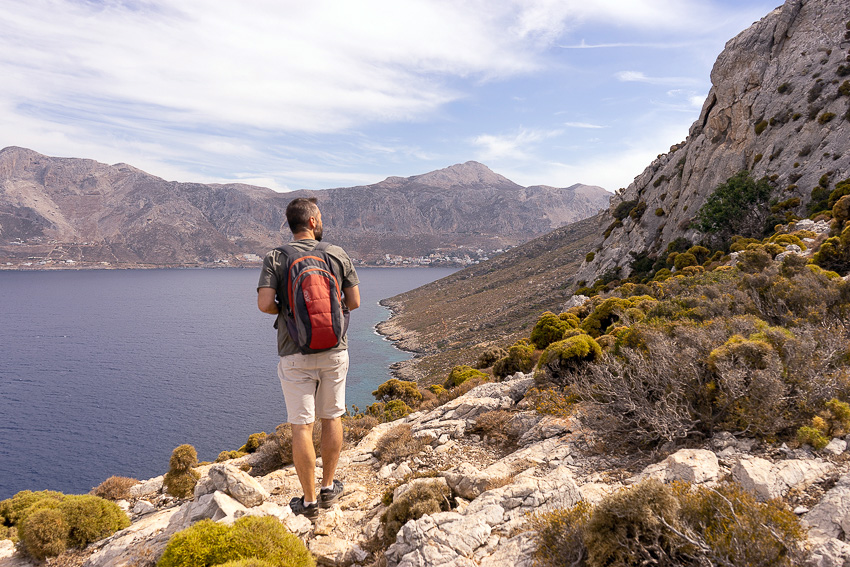 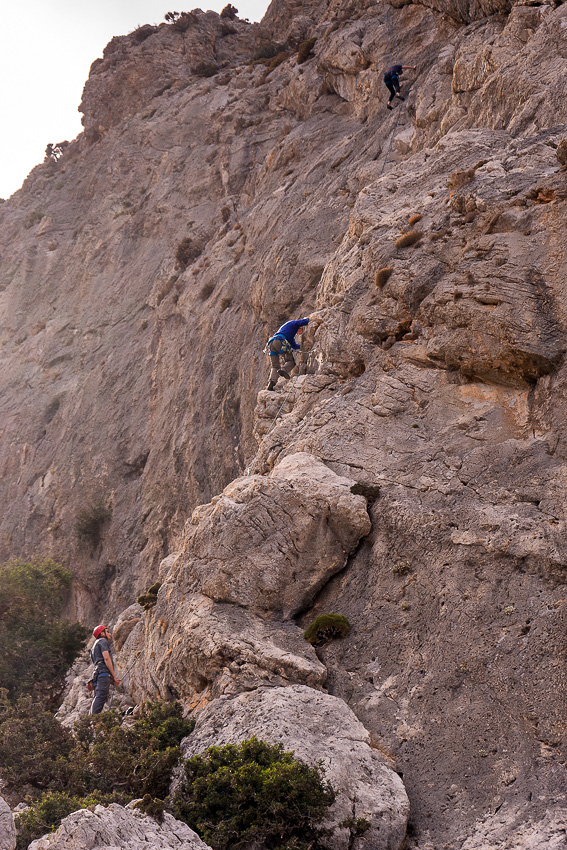 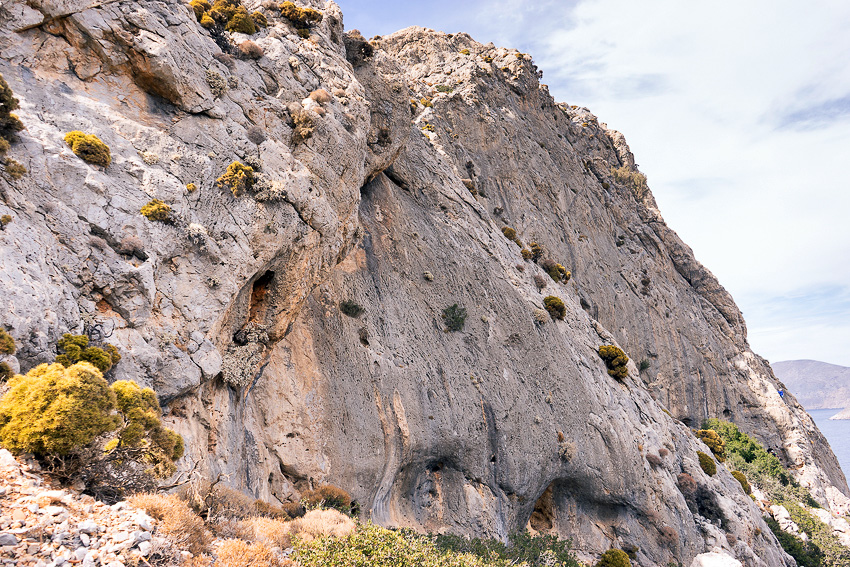 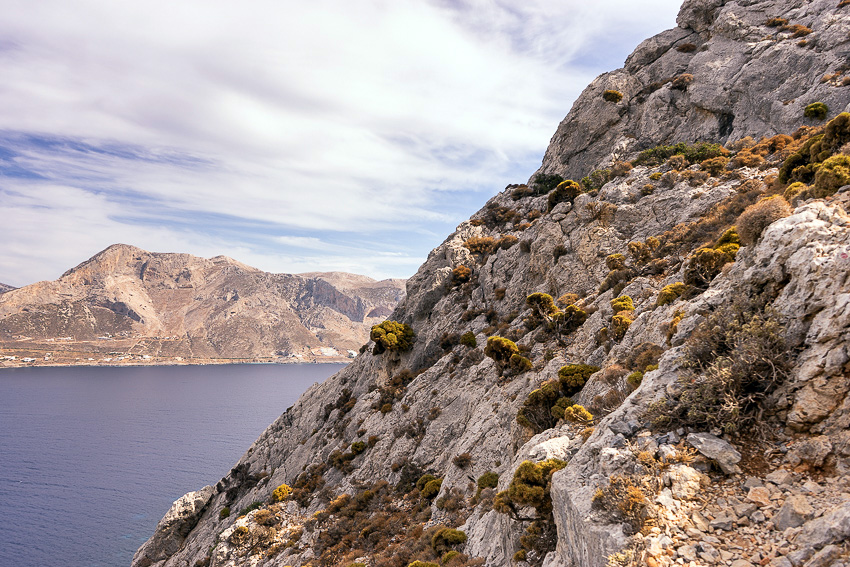 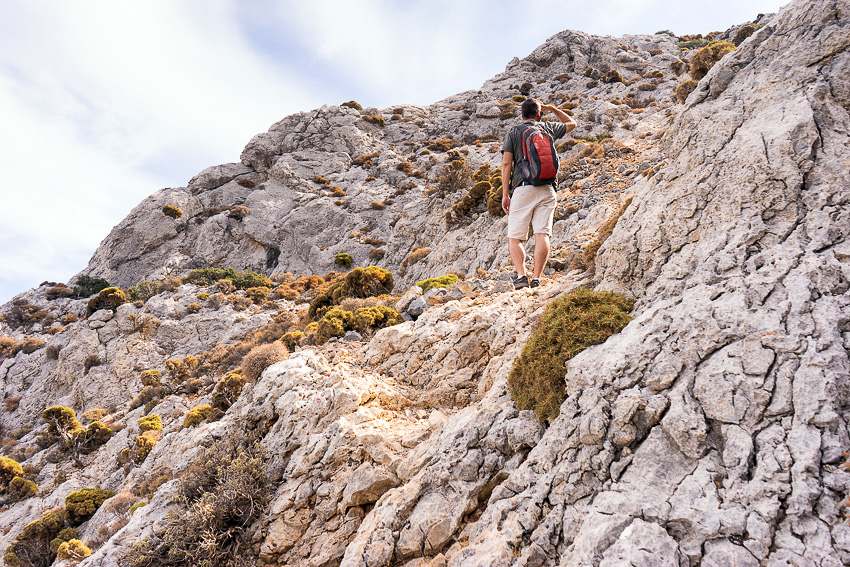 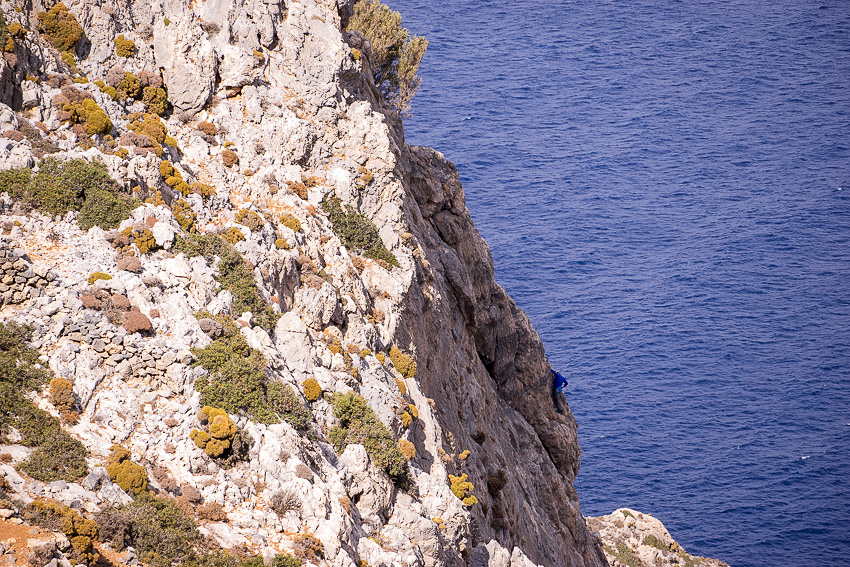 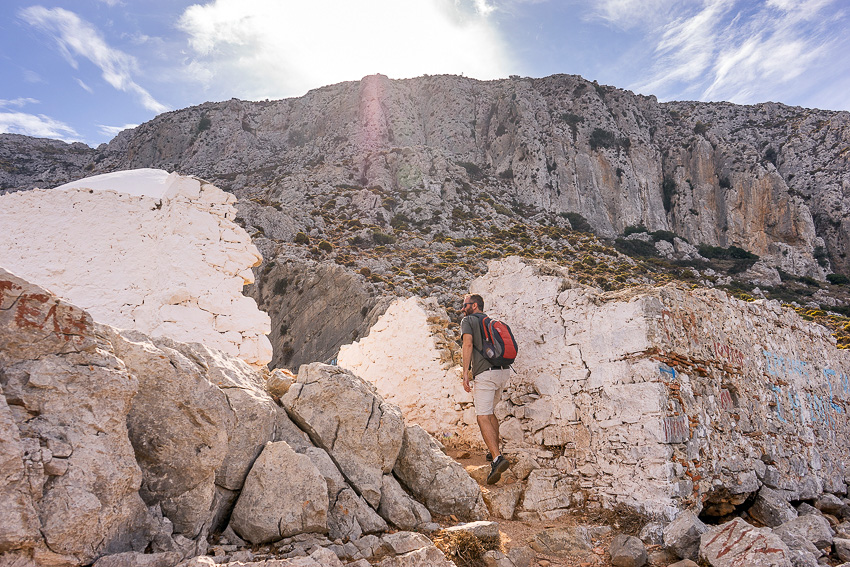 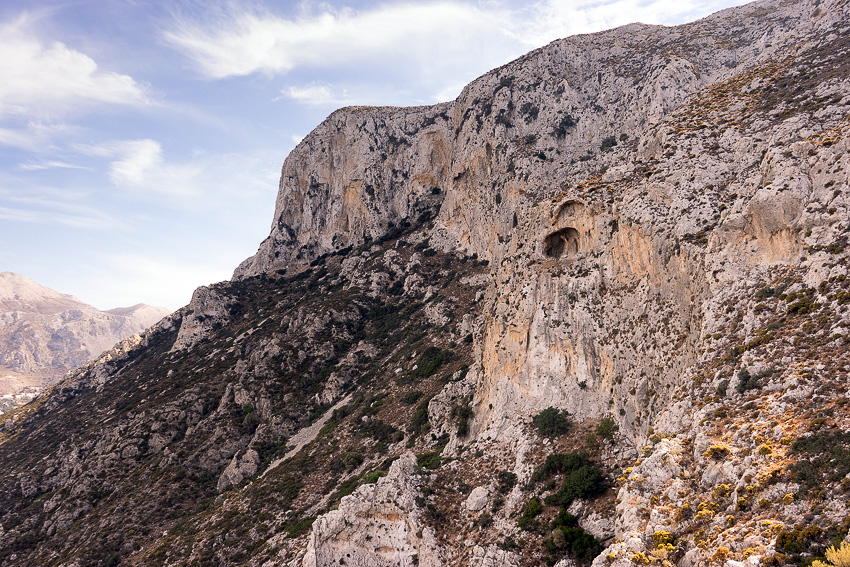 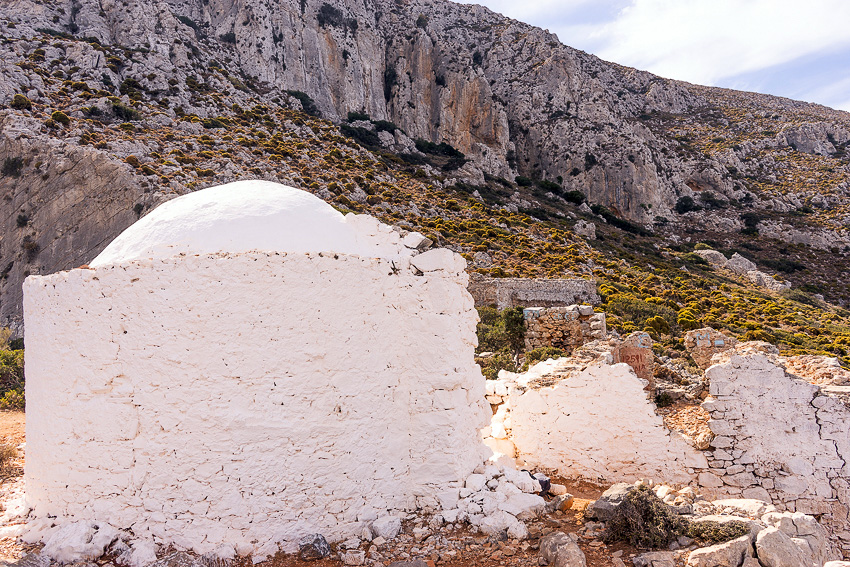 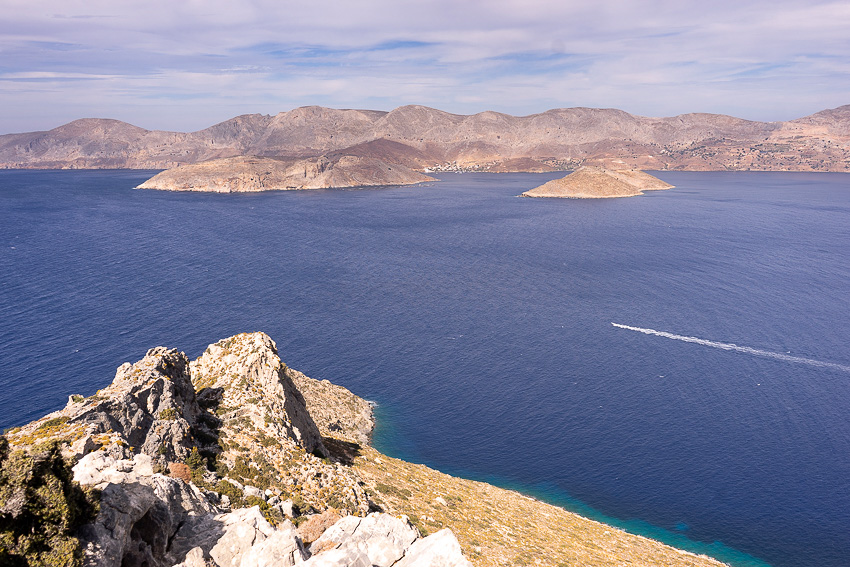 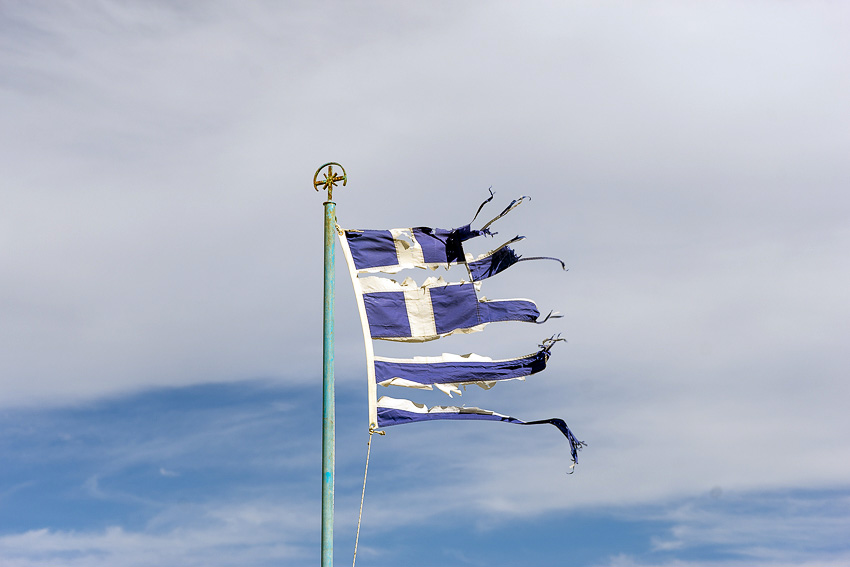 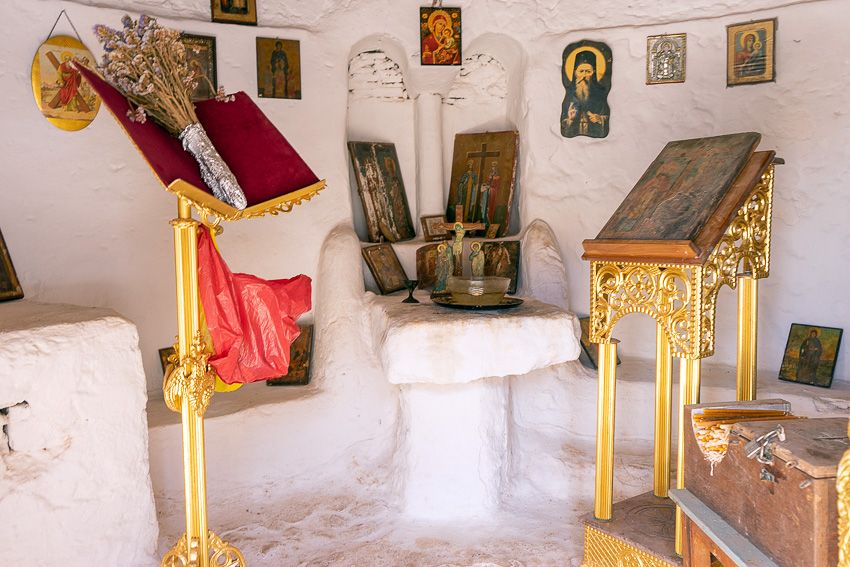 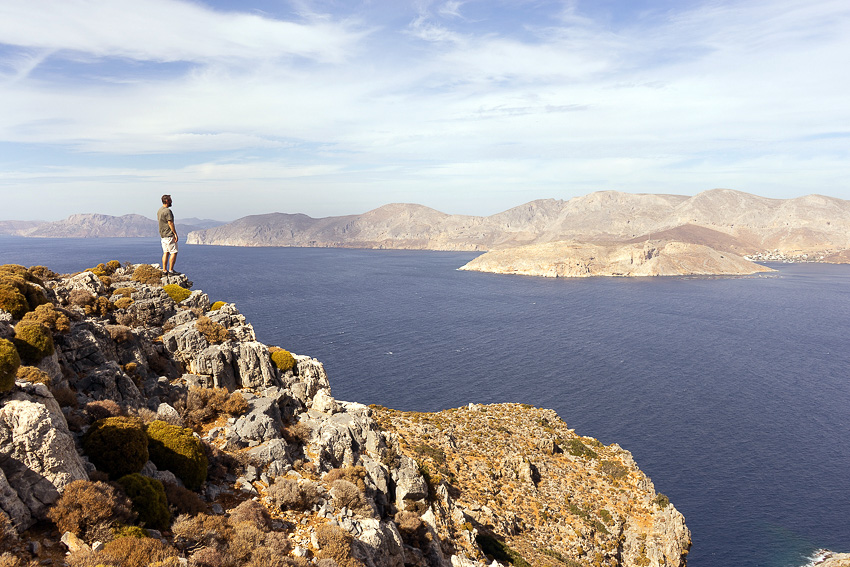 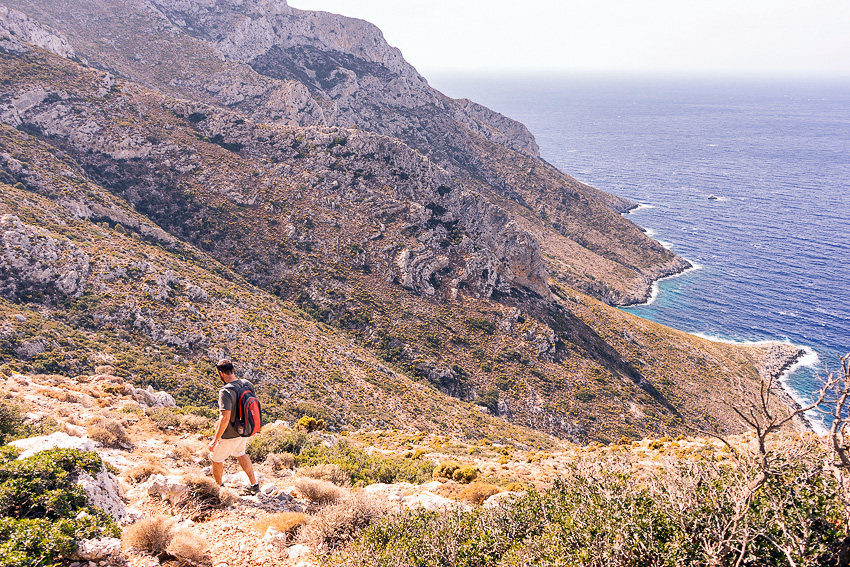 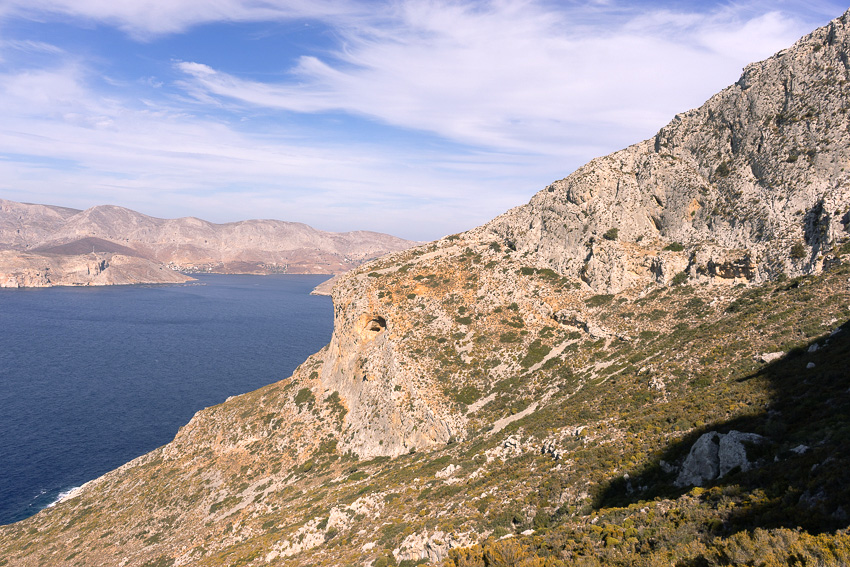 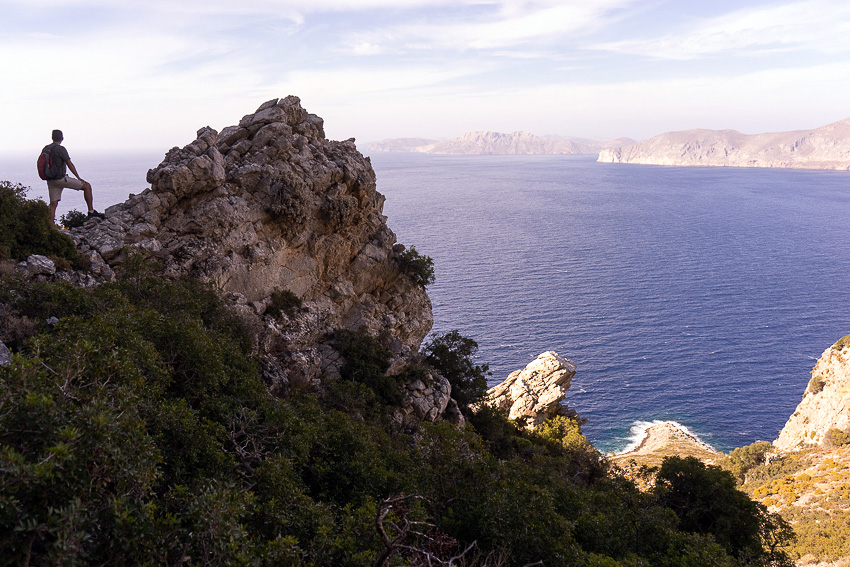 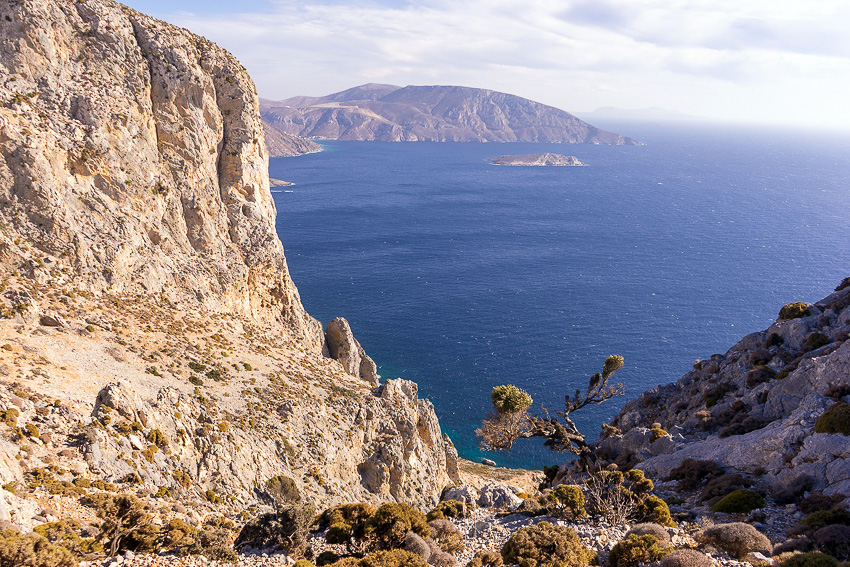 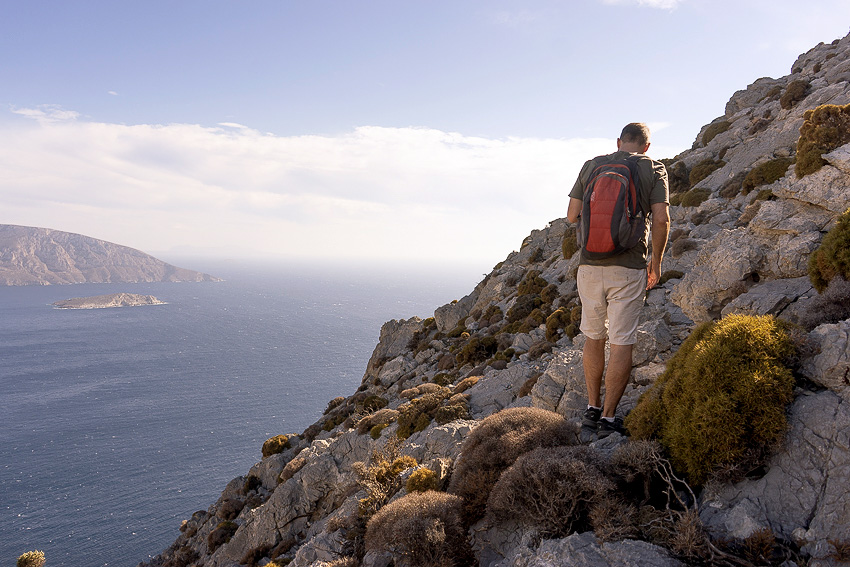 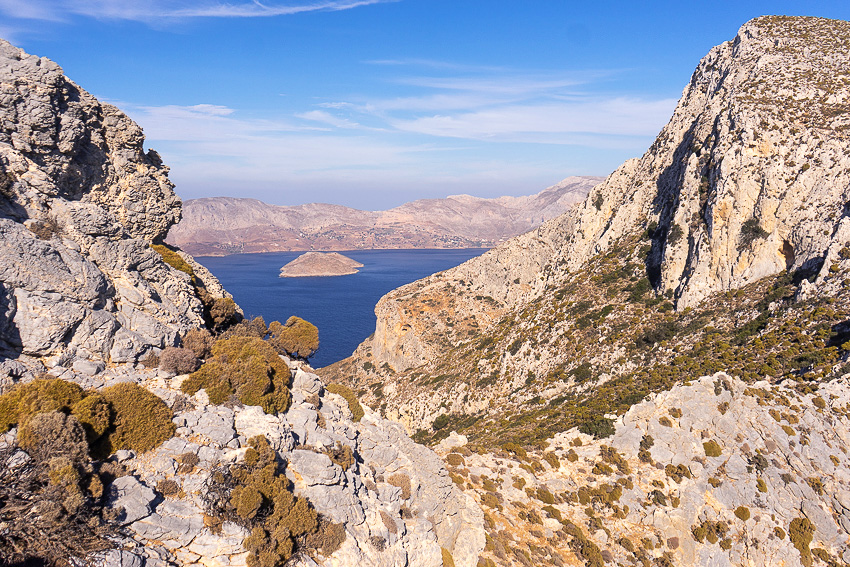 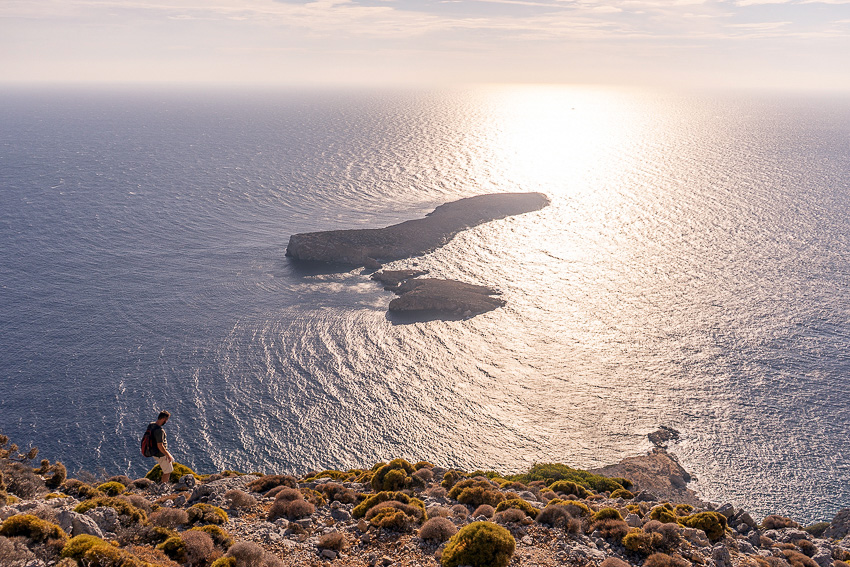 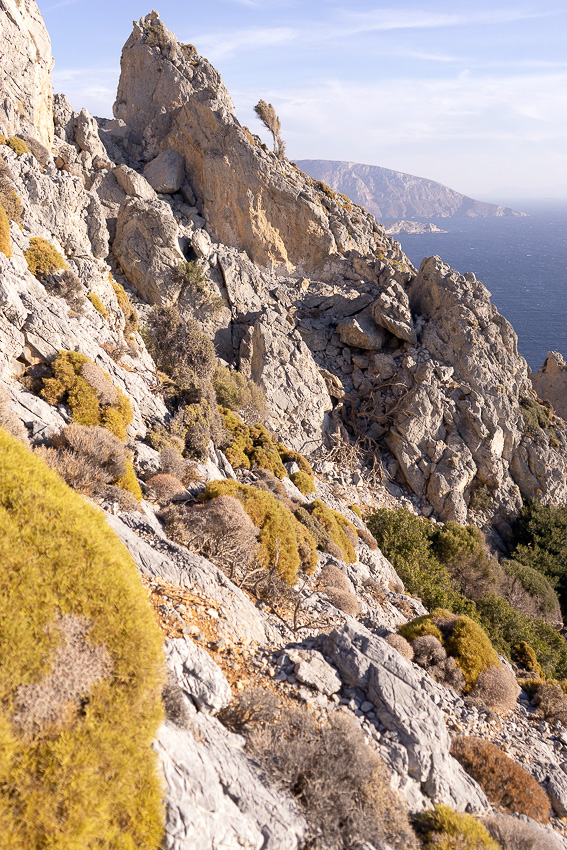 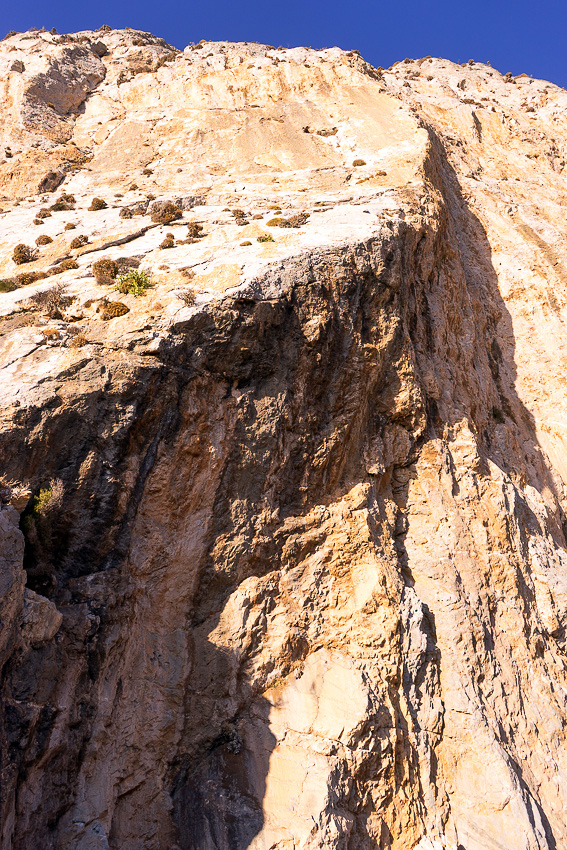 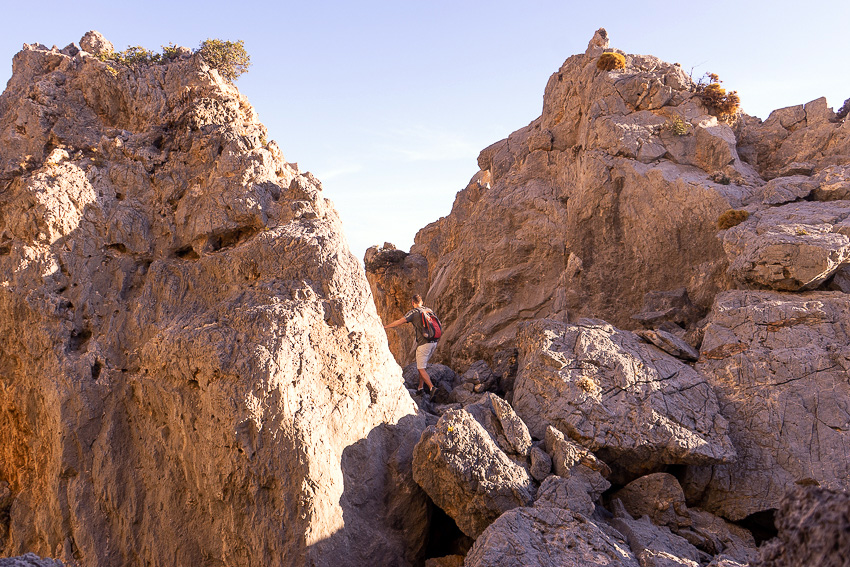 The Pink Beach Of Elafonisi And Our Second Road Trip Day